For the 2018 Awards the BC Library Association generously invited BCLTA to be part of their Annual Awards Luncheon. It was a real honour for Jerrilyn Schembri, as BCLTA President, to present the BCLTA trustee awards in front of a large crowd from across the library community – what a way to showcase the work of boards and trustees!

The 2018 Award recipients are: 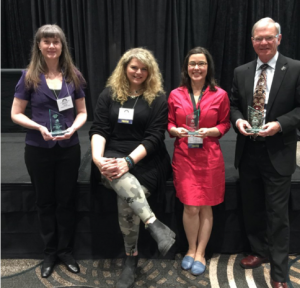 Representing, supporting, and connecting BC public library trustees since 1977.

Libraries Without Borders US @lwb_usa ·
18h

#Libraries across the Chicago area are working to resist the rise of book ban challenges and protect the #freedomtoread.

The Gabriel Garcia Marquez Library just opened in a working class neighborhood in Barcelona. It’s magical. It’s real. And it’s the kind of place that makes you wonder why every city doesn’t give its residents palaces for the people. #library

Even the most organized, responsible, and amiable board needs to document its activities, internal rules, and processes.

Here are the different documents to which your board needs to pay attention. https://hubs.ly/Q01z7Tbh0

ICYMI, there is a recording of the great conversation between @ejmknox and Toni Samek, "Censorship Is No Friend of Social Justice: Protecting Intellectual Freedom in Polarized Times." Check it out ahead of #FTRWeek! https://cfe.torontomu.ca/events/censorship-no-friend-social-justice-protecting-intellectual-freedom-polarized-times